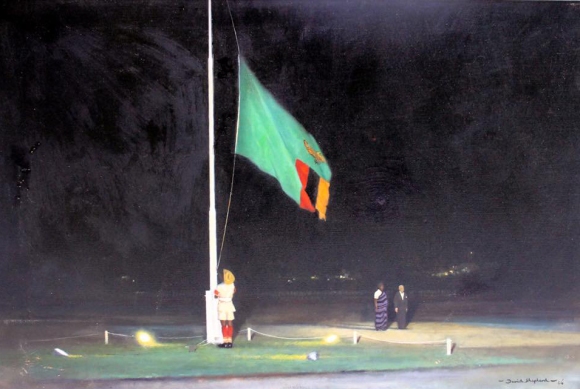 53 years after independence and I did not wish anyone a Happy Independence Day because I was not happy. Why pretend? Is there any honour in pretending that I am happy?

Optimists (who will undoubtedly show up with their middle fingers in their mouths) will remind me that we successfully negotiated (fact: not won) our independence from British colonial rule and that we are also supposedly free. However even Stevie Wonder could probably see that we have also lamentably botched (let me be blunt)…fucked it all up and this is what also has me feeling angry. There is absolutely no shame in feeling angry about the state of our nation. In fact many a Zambian should try it.

The optimists usually give me a guilt trip about how negative I sometimes get about the state of our nation (Ku Twitter and kwa Facebook especially). Just so we are clear my definition of an optimist is usually a person that;

I honestly do not know how anyone would expect me to find any shred of positivity when we have somewhat collectively failed to defend our great nation against (to borrow the words of Ghanaian economist George Ayittey) a “phalanx of bandits and crooks who use the instruments of state power to enrich themselves, their cronies, and tribesmen and exclude everybody else.”

We are such a shameful generation of disillusioned punks that cannot even get angry to save our own fucking lives let alone demand for accountability.

Allow me to digress. Our Government recently spent forty two million dollars on garishly overpriced “wheelbarrows,” or Fire Trucks as they would like us to believe (Just so we are clear Minister of National Planning and Development, Lucky Mulusa recently described the Fire Trucks his Government procured as Wheelbarrows so those are his words and not mine). You would think that this would piss off someone…anyone out there. Well except for Laura Miti and Pilato (God bless them with more courage),but are we so meek that we fail to recognize that the more angrier people we have, the more likely we will influence change? 1964 was not rocket science.

Our Grandparents just became collectively angry and the British were finally pressured to negotiate. Period!

There are a lot of things that have gone fundamentally wrong in Zambia, but I will not go into that because the fact is that we are all very clear about the ‘what,’ that has gone wrong with this country. Governance, Health, Education, Energy, Justice, Sport even the social fabric that we were once very proud of has perhaps been irretrievably broken down.

Ironically we also seem to have the ‘who’ we should blame for everything that has gone wrong in Zambia all figured out. This is why the majority of us prefer to fold our hands, get comfortable on our collective complacent assholes and complain about ‘THEM’ and about the things that ‘THEY’ are NOT doing that result in the challenges that directly affect us everyday.

It is easy to complain or to rip off a cheek-to-cheek sneer in total disgust or to mumble a few obscenities to the first person that will listen about how our ‘Leaders,’ especially our Leaders in Government have failed to address the challenges we are currently facing. It is also very easy to eloquently and intelligently outline the problems as well as possible solutions that will get us out of this mess.

Annoyingly we ALL just stop short of getting angry (how ironic), for as long as we can go on with our lives until the next time that Zambia Electricity Supply Corporation turns off our power (because someone corruptly procured cheap electricity turbines from China but do not quote me because I am just speculating) or our currency becomes one Kwacha less relevant in our own economy.

It is easy to point the finger at this ‘thing’ that we all call, The Government.

A thing, because we sometimes talk about it as if it is a “booby trap” that the ‘Colonial Master’ left behind to blow our freedom to smithereens. Come to think of it…maybe they did (picture of Kaunda dancing with the Queen of England comes to mind. Hhmmm…where in Chinsali did the old man learn to ball dance?)

What I find absolutely paradoxical is that the Government is made up of ‘Leaders’ that we entrusted with the responsibility to keep the promise of our independence…the promise of what we called…“KWACHA! Our dawn or that sunrise that guaranteed equality for all among a many other things in 1964. So how can we exclude ourselves from taking responsibility over the challenges that we now face in Zambia today? I mean whatever excuse makes you sleep better at night but let me put it as plainly as I can…

LEADERSHIP IS A REFLECTION OF THE LED!

So if we have “useless” people in leadership today it is because we, the people that are led, are just as useless. That means we are just as complicit as the Government or our leaders are for the problems our developing economy is facing and the impact that these problems are having on our way of life.

I will not belabor this point so let us think about accountability in its most basic form which is to provide adequate checks and balances for the Government that go beyond voting for the more talkative candidate or the one with the best song.

Allow me to add that the last election was sold to the highest bidder at every level (Local Government, Constituency and National) and this is why our democracy is a sham…an adaptation of colonialism which never left but changed colour. The gluttonous “haves” presiding over the “have nots.”

WHY CAN’T WE BE PATRIOTICALLY ANGRY ENOUGH TO TAKE THIS COUNTRY BACK?

United States of America, Minnesota State Representative Ilhan Omar, the first Somali-American elected to public office recently discussed what Patriotism is and I think that it is very important that I end this blog post by adapting some of her words.

It is really important for citizens…those of us who are led to stay vigilant and understand that patriotism isn’t fully believing in a particular administration. True Patriotism is about fighting for our Country and safeguarding its dignity. It is also about making sure that every citizen as well as the constitution is protected and uplifted. Once we believe in and start to protect a particular head of state, then we lose sight of everything (You would think we would have learned from “Uwamuyaya or Lesa Kumulu, Kaunda panshi.”)

It is very disturbing and worrying when I hear people unashamedly say YOU CANNOT SAY ANYTHING ABOUT THE PRESIDENT or talk in this or that way about the ruling Party and yet we live in a democracy, in a Country that lives by a constitution that protects the right to free speech. As citizens of this great country we need to grow our collective “balls” and begin to actively:

We must always remember that;

Error: Twitter did not respond. Please wait a few minutes and refresh this page.